NNI Supplement to the President's 2015 Budget 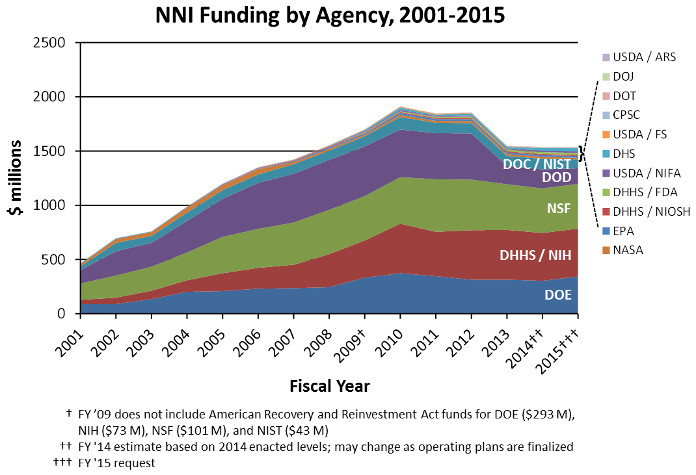 This document is a supplement to the President’s 2015 Budget request submitted to Congress on March 4, 2014. It gives a description of the activities underway in 2013 and 2014 and planned for 2015 by the Federal Government agencies participating in the National Nanotechnology Initiative (NNI), primarily from a programmatic and budgetary perspective. It is based on the NNI Strategic Plan released in February 2014 and reports actual investments for 2013, estimated investments for 2014, and requested investments for 2015 by Program Component Area (PCA), as called for under the provisions of the 21st Century Nanotechnology Research and Development Act of 2003 (Public Law 108-153, 15 USC §7501). The report also addresses the requirement for Department of Defense reporting on its nanotechnology investments, per 10 USC §2358.

The President’s 2015 Budget provides over $1.5 billion for the National Nanotechnology Initiative (NNI), a continued investment in support of the President’s priorities and innovation strategy. Cumulatively totaling nearly $21 billion since the inception of the NNI in 2001 (including the 2015 request), this support reflects nanotechnology’s potential to significantly improve our fundamental understanding and control of matter at the nanoscale and to translate that knowledge into solutions for critical national issues. The NNI investments in 2013 and 2014 and those proposed for 2015 continue the emphasis on accelerating the transition from basic R&D to innovations that support national priorities, while maintaining a strong base of foundational research, to provide a pipeline for future nanotechnology-based innovations.

The President’s 2015 Budget supports nanoscale science, engineering, and technology R&D at 11 agencies. Another 9 agencies have nanotechnology-related mission interests or regulatory responsibilities. The NNI Supplement to the President’s 2015 Budget documents progress of these NNI participating agencies in addressing the goals and objectives of the NNI. (See the Acronyms page for agency abbreviations.) 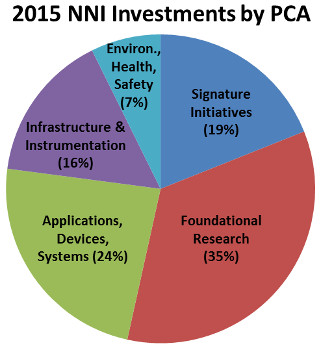 One significant change for the 2015 Budget, which is reflected in the figures provided in this document for 2013 and 2014, is a revision in the Program Component Areas (PCAs), budget categories under which the NNI investments are reported. Note that this represents an update of how NNI investments by the Federal Government are tabulated, but not a change in the overall scope of the Initiative. As outlined in the 2014 NNI Strategic Plan, the new PCAs are more broadly strategic, fully inclusive, and consistent with Federal research categories, while correlating well with the NNI goals and high-level objectives. Of particular note is the creation of a separate PCA for the Nanotechnology Signature Initiatives (NSIs), reflecting the high priority placed on NSIs in the 2015 OMB/OSTP R&D Priorities Memo.

Yes, nanotechnology is becoming ubiquitous in our daily lives and has found its way into many commercial products, for example, strong, lightweight materials for better fuel economy; targeted drug delivery for safer and more effective cancer treatments; clean, accessible drinking water around the world; superfast computers with vast amounts of storage; self-cleaning surfaces; wearable health monitors; more efficient solar panels; safer food through packaging and monitoring; regrowth of skin, bone, and nerve cells for better medical outcomes; smart windows that lighten or darken to conserve energy; and nanotechnology-enabled concrete that dries more quickly and has sensors to detect stress or corrosion at the nanoscale in roads, bridges, and buildings. By some estimates, revenue from the sale of nanotechnology-enabled products made in the United States has grown more than six-fold from 2009 through 2016.

Stay Connected with the NNI