Early examples of nanostructured materials were based on craftsmen’s empirical understanding and manipulation of materials. Use of high heat was one common step in their processes to produce these materials with novel properties.

4th Century: The Lycurgus Cup (Rome) is an example of dichroic glass; colloidal gold and silver in the glass allow it to look opaque green when lit from outside but translucent red when light shines through the inside. (Images at left.)

13th-18th Centuries: “Damascus” saber blades contained carbon nanotubes and cementite nanowires—an ultrahigh-carbon steel formulation that gave them strength, resilience, the ability to hold a keen edge, and a visible moiré pattern in the steel that give the blades their name. (Images below.)

Examples of Discoveries and Developments Enabling Nanotechnology in the Modern Era

These are based on increasingly sophisticated scientific understanding and instrumentation, as well as experimentation.

1951: Erwin Müller pioneered the field ion microscope, a means to image the arrangement of atoms at the surface of a sharp metal tip; he first imaged tungsten atoms.

1956: Arthur von Hippel at MIT introduced many concepts of—and coined the term—“molecular engineering” as applied to dielectrics, ferroelectrics, and piezoelectrics

1958: Jack Kilby of Texas Instruments originated the concept of, designed, and built the first integrated circuit, for which he received the Nobel Prize in 2000. (Image at left.)

1959:  Richard Feynman of the California Institute of Technology gave what is considered to be the first lecture on technology and engineering at the atomic scale, "There's Plenty of Room at the Bottom" at an American Physical Society meeting at Caltech. (Image at right.)

1965: Intel co-founder Gordon Moore described in Electronics magazine several trends he foresaw in the field of electronics. One trend now known as “Moore’s Law,” described the density of transistors on an integrated chip (IC) doubling every 12 months (later amended to every 2 years). Moore also saw chip sizes and costs shrinking with their growing functionality—with a transformational effect on the ways people live and work. That the basic trend Moore envisioned has continued for 50 years is to a large extent due to the semiconductor industry’s increasing reliance on nanotechnology as ICs and transistors have approached atomic dimensions.1974:  Tokyo Science University Professor Norio Taniguchi coined the term nanotechnology to describe precision machining of materials to within atomic-scale dimensional tolerances. (See graph at left.)

1981:  Gerd Binnig and Heinrich Rohrer at IBM’s Zurich lab invented the scanning tunneling microscope, allowing scientists to "see" (create direct spatial images of) individual atoms for the first time. Binnig and Rohrer won the Nobel Prize for this discovery in 1986.

1985:  Rice University researchers Harold Kroto, Sean O’Brien, Robert Curl, and Richard Smalley discovered the Buckminsterfullerene (C60), more commonly known as the buckyball, which is a molecule resembling a soccer ball in shape and composed entirely of carbon, as are graphite and diamond. The team was awarded the 1996 Nobel Prize in Chemistry for their roles in this discovery and that of the fullerene class of molecules more generally. (Artist's rendering at right.) 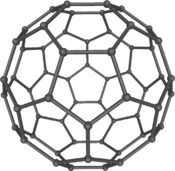 1986:  Gerd Binnig, Calvin Quate, and Christoph Gerber invented the atomic force microscope, which has the capability to view, measure, and manipulate materials down to fractions of a nanometer in size, including measurement of various forces intrinsic to nanomaterials.

1989: Don Eigler and Erhard Schweizer at IBM's Almaden Research Center manipulated 35 individual xenon atoms to spell out the IBM logo. This demonstration of the ability to precisely manipulate atoms ushered in the applied use of nanotechnology. (Image at left.)

1991: Sumio Iijima of NEC is credited with discovering the carbon nanotube (CNT), although there were early observations of tubular carbon structures by others as well. Iijima shared the Kavli Prize in Nanoscience in 2008 for this advance and other advances in the field. CNTs, like buckyballs, are entirely composed of carbon, but in a tubular shape. They exhibit extraordinary properties in terms of strength, electrical and thermal conductivity, among others. (Image below.)

1993: Moungi Bawendi of MIT invented a method for controlled synthesis of nanocrystals (quantum dots), paving the way for applications ranging from computing to biology to high-efficiency photovoltaics and lighting. Within the next several years, work by other researchers such as Louis Brus and Chris Murray also contributed methods for synthesizing quantum dots.

1998:  The Interagency Working Group on Nanotechnology (IWGN) was formed under the National Science and Technology Council to investigate the state of the art in nanoscale science and technology and to forecast possible future developments. The IWGN’s study and report, Nanotechnology Research Directions: Vision for the Next Decade (1999) defined the vision for and led directly to formation of the U.S. National Nanotechnology Initiative in 2000.

2000: President Clinton launched the National Nanotechnology Initiative (NNI) to coordinate Federal R&D efforts and promote U.S. competitiveness in nanotechnology. Congress funded the NNI for the first time in FY2001. The NSET Subcommittee of the NSTC was designated as the interagency group responsible for coordinating the NNI.

2003: Naomi Halas, Jennifer West, Rebekah Drezek, and Renata Pasqualin at Rice University developed gold nanoshells, which when “tuned” in size to absorb near-infrared light, serve as a platform for the integrated discovery, diagnosis, and treatment of breast cancer without invasive biopsies, surgery, or systemically destructive radiation or chemotherapy.2004: The European Commission adopted the Communication “Towards a European Strategy for Nanotechnology,” COM(2004) 338, which proposed institutionalizing European nanoscience and nanotechnology R&D efforts within an integrated and responsible strategy, and which spurred European action plans and ongoing funding for nanotechnology R&D. (Image at left.)

2004:  SUNY Albany launched the first college-level education program in nanotechnology in the United States, the College of Nanoscale Science and Engineering.

2005: Erik Winfree and Paul Rothemund from the California Institute of Technology developed theories for DNA-based computation and “algorithmic self-assembly” in which computations are embedded in the process of nanocrystal growth.

2006:  James Tour and colleagues at Rice University built a nanoscale car made of oligo(phenylene ethynylene) with alkynyl axles and four spherical C60 fullerene (buckyball) wheels. In response to increases in temperature, the nanocar moved about on a gold surface as a result of the buckyball wheels turning, as in a conventional car. At temperatures above 300°C it moved around too fast for the chemists to keep track of it! (Image at left.)

2007: Angela Belcher and colleagues at MIT built a lithium-ion battery with a common type of virus that is nonharmful to humans, using a low-cost and environmentally benign process. The batteries have the same energy capacity and power performance as state-of-the-art rechargeable batteries being considered to power plug-in hybrid cars, and they could also be used to power personal electronic devices. (Image at right.)

2008:  The first official NNI Strategy for Nanotechnology-Related Environmental, Health, and Safety (EHS) Research was published, based on a two-year process of NNI-sponsored investigations and public dialogs. This strategy document was updated in 2011, following a series of workshops and public review.

2009–2010: Nadrian Seeman and colleagues at New York University created several DNA-like robotic nanoscale assembly devices. One is a process for creating 3D DNA structures using synthetic sequences of DNA crystals that can be programmed to self-assemble using “sticky ends” and placement in a set order and orientation. Nanoelectronics could benefit: the flexibility and density that 3D nanoscale components allow could enable assembly of parts that are smaller, more complex, and more closely spaced. Another Seeman creation (with colleagues at China’s Nanjing University) is a “DNA assembly line.” For this work, Seeman shared the Kavli Prize in Nanoscience in 2010.

2010: IBM used a silicon tip measuring only a few nanometers at its apex (similar to the tips used in atomic force microscopes) to chisel away material from a substrate to create a complete nanoscale 3D relief map of the world one-one-thousandth the size of a grain of salt—in 2 minutes and 23 seconds. This activity demonstrated a powerful patterning methodology for generating nanoscale patterns and structures as small as 15 nanometers at greatly reduced cost and complexity, opening up new prospects for fields such as electronics, optoelectronics, and medicine. (Image below.)

2011: The NSET Subcommittee updated both the NNI Strategic Plan and the NNI Environmental, Health, and Safety Research Strategy, drawing on extensive input from public workshops and online dialog with stakeholders from Government, academia, NGOs, and the public, and others.

2013:
-The NNI starts the next round of Strategic Planning, starting with the Stakeholder Workshop.
-Stanford researchers develop the first carbon nanotube computer.